Ten years is a lot of time for kids to become accustomed to gadgets and technology. What starts as a medium of entertainment, turns into a much-needed aid to amass all the knowledge in the world. Curiosity begins to build up in the minds of children as they grow old. Books were the only medium to satiate this curiosity, a decade back when computers were exorbitantly priced and were far from the grasp of commoners. A decade worth of Research and Development has made the technology smaller, advanced, and cheaper than earlier.

Handheld devices are considered more practical as they weigh less and are more pocket/backpack friendly. The proliferating market of portable devices is a prime example of that. Now that the devices have gained popularity, kids want to have their own, personal device rather than share it with the members of the household. The age is perfect to encourage the kids to become inclined to education and a laptop is a perfect fit for that.

At the age of ten years, kids are bound to have some exposure to computers in their educational institutions. By providing a personal laptop you can introduce a medium to gain knowledge that is present in the vastness of the internet. Even the schools are introducing tech-based learning that involves short projects involving micro-computers, IoT, etc that are in vogue-now. A laptop will help them understand more about the convoluted technicalities with ease and bolster their enthusiasm. Basic computer skills, if acquired at an early age, can build-up to be an employable skill in the long run.

We’ve established the importance of a laptop but there are a few factors to keep in mind before buying the first thing on the market. The first factor is the intended use of the laptop. If your daughter needs a laptop for using the internet for her school projects and some minor research a high-end specification laptop would be overkill and a sheer waste of a good gadget. So a basic-medium end specification laptop will suffice for a kid.

The size of the laptop is also a factor that can trouble the kids. The laptop should not be too big and bulky for your daughter, as it will become unfeasible to maneuver. The lighter laptop can be picked up and switched places with, be it on a tiny table, or a bed, or the floor itself. It will also not require you to position it every time she needs it. A touch-enabled screen (accompanied by a stylus) can bring out the inner artist in your child as they create drawings and designs of their own. The visualization of their ideas will compel them to imagine more and is highly intuitive.

If you want your kid to have the best of both worlds, a two-in-one laptop is the right choice for you. The laptop can be operated in both keyboard and non-keyboard mode, owing to the tablet mode feature in Windows 10. It can be used as a study/recreational medium as per the choice of your kid. The battery life of the laptop should last long enough to fulfill a session and be in the range of 4-6 hours. That covers the basic pre-requisites before choosing the best laptop for your 10-year-old daughter.

There is an overwhelming number of choices available in the market, but we’ve researched a few laptops that will do just fine for your kid. 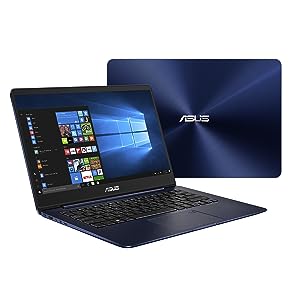 ASUS VivoBook S15 S533 is a laptop with a slim form-factor and decent internal specifications. The laptop comes in a variety of color schemes that will appeal to kids of young age. It is slightly bulky but that is mostly due to the big display and bigger battery present inside it. The micro-bezel display is a visual stunner for kids that can enjoy content from various platforms meant for them, It is a Full-HD display that is bright and crisp to look at. It bears a resolution of 1920*1080 pixels that has wide-viewing angles. The display is Nano-Edge, which means thinner bezels on all four sides.

While the display is great for everything, so is the added security mechanisms on the laptop. It features a fingerprint sensor on the trackpad that can restrict anyone but the primary user from accessing the device. You can use this as a backup mechanism to add parental controls on the laptop. It has a LED-backlit keyboard that is usable in the night-time and works fine while typing on in. The trackpad is bigger than usual and will help the kid navigate the device without any difficulty. The speakers are tuned by Harman-Kardon and offer a decent audio output.

The internal components are impressive too, as the laptop houses a four-core Intel i5 processor that is more than enough for light browsing, using Microsoft applications, and much more. A four-core processor will not encounter frequent hiccups and can run Windows 10 applications with the 8GB DDR4 RAM, that is enough for background processes as the kids tend to leave a lot of applications open. It comes with 512 GB SSD, yes a solid-state drive that offers the best possible data transfer speed on a laptop. It comes with onboard Intel UHD 620 graphics that can run all the GPU intensive applications with ease.

The laptop has a configuration that won’t become obsolete within a year or two. It comes with Wi-Fi 6 for faster wireless connectivity along with Bluetooth 5 but lacks an ethernet port. It does not come with an Optical disk drive. The laptop’s battery will last a day and pose no problem using it wirelessly for longer hours. All in all, a specification monster that can be your kid’s entry to the computer world that does not require a huge investment. 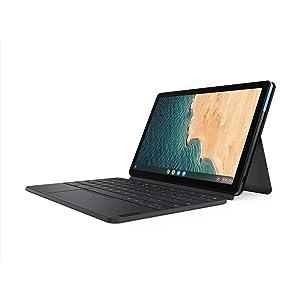 Lenovo CHROMEBOOK DUET 2 IN 1 is a lightweight laptop/tablet that runs on the Chrome OS and is one of the best laptop for your ten-year-old daughter. Chromebooks are widely popular for their quirky design and compactness that is a perfect fit for your young ones. The Chromebooks are not hardware driven builds as they do not physically run every service available on it. It was designed as a platform to run web-based service and does the same with ease. The only requirement is a robust internet connection that has enough bandwidth to run web-based applications on the laptop.

This Chromebook in particular uses a Full-HD resolution display that is perfect to run the Chrome OS. The IPS display bears a resolution of 1920*1080 pixels, and the color output is vivid due to the small size. It also has a brightness of 400 nits that makes it perfectly capable of use under bright light. The glossy screen does get a little smudgy that is visible in outdoor use. Moreover, being a 2-in-1, that display is detachable from the keyboard and thus a perfect companion for tablet use.

The detachable keyboard is magnetic and fits accurately to the display. Since there is no physical hinge to support the screen, the case doubles up as a stand to use it in the laptop mode. The device has two cameras, one on the rear and one on the front. The resolution is not great and is just there for namesake purposes. The camera bump is visible but minimized by the case. It comes with average sounding speakers and a headphone is recommended for the crisp audio experience.

The display is touch-enabled and supports stylus input, so creativity is not obstructed in any manner on the device. It boots up in eight seconds and must be connected to the internet as it verifies the system integrity and scans for viruses if any. The boot time can vary as you install more applications on it, but is still a handy feature as kids do not possess deep knowledge about the security concerns of a device.

Hardware specification is nothing fancy. It houses a MediaTek Helio P60T Processor that is adept in running the Chrome OS without any lag whatsoever. It comes with 4 GB of LPDDR4X memory that consumes a lot less power than the conventional RAM modules. The storage is eMMC type and is faster than the basic SATA HDD, but the capacity is only 64 GB. The graphics processor is the ARM G72 MP3 800GHz that can support the display resolution and the content crafted for it without any stutters. The applications and games can be installed from the store as per your kid’s requirements.

The device comes with a few of the Google apps such as Calculator, Chrome Browser, Chrome Canvas, Files, Google Docs, Google Drive, Google Keep, Google Play Movies, Google Play Music, Google Play Store, Google Sheets, and Google Slides. Every basic application is present out of the box and doesn’t require frequent downloads. That being said it is different from the Windows interface and fairly minimalistic in comparison. Lenovo claims it to have a battery life of up to 10 hours, but you can expect a solid 7-8 hours instead of the official number, as a wirelessly driven gadget consumes a lot of battery. 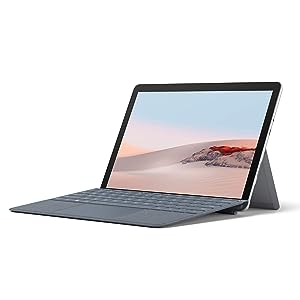 Surface Go 2 is a newly-launched, much-improved version of its predecessor that intends to take the Apple iPad head-on. But there are a few little areas in which it has improved from the yesteryear model and a few areas that still need improvement. The pricing is the primary factor that will compel most users to opt for the Surface Go 2.

It is a beautiful machine altogether, with a metallic body and a digital stylus that makes it stand out from the crowd. It is one of the compact designs that offer a full-fledged Windows experience and a functioning application store. The tablet comes as a standalone device and does not include the keyboard. That is a separate purchase if you want the 2-in-1 experience. The keyboard is built well and offers a tactile feel while using it. It does include a trackpad, unlike most attachable keyboards that lack the feature.

It comes with an inbuilt stand that is not flimsy and extends down and can be adjusted at the required angle. So the only thing you have to do is, attach the keyboard and a Windows laptop is ready for use. It is targeted at students and working professionals and the kids will love this gorgeous study companion. The Surface Go 2 is one of the few devices to feature a 5 megapixel 1080 pixel webcam that offers the best video conferencing quality to date. Two microphones improve audio quality.

The display is the primary alluring feature that will keep you hooked on for hours. The proprietary pixel sense display comes with a resolution of 1920*1080 pixels and supports touch input. The bezels are kept slightly thick to prevent accidental touches while using the device. The internal components are kept different to meet various price demands but we recommend you to get the one with the Intel m3 processor and SSD variant as it works well with demanding applications.

That being said the processor can run most of the applications from the store that are optimized for it. The Pentium variant lacks power in more demanding applications. The 8 GB RAM variant is recommended if you want a future proof device for your kid. It is fit for content consumption, creative learning, and as a work station. The battery has not increased much from the previous version and will last up to 7 hours on moderate usage. The power cable attaches itself magnetically to the charging port and prevents accidental cord ripping. Surface Go 2 is one of the best laptop for a 10-year-old daughter.

These were a few recommendations for your young ones that will surely ignite the fire of curiosity inside them.