The lucrative PC builds with overkill specs might seem like an only option when it comes to gaming and especially game developers. A laptop seems like an unconventional choice if you ask any gaming enthusiast, but there are a few convolutions with the PC build. The developers need to carve out extra time, working tirelessly to perfect their work. You might not know when an idea might strike, and the laptops seem to be a feasible option for the purpose.

The Unreal Engine developed by Epic Games is one such development environment that requires extra power while working on it. It is a configuration intensive software that requires pooling in almost every readily available hardware resource, be it RAM, VRAM, and CPU. So orthodox laptops and desktops might not be able to even get past the loading menu. Laptops offer portability and with the recent advancements by major competitors, there are options available that are running desktop-grade components in a laptop.

Since we’re talking about the best technology has to offer, here is a comprehensive list of the Best laptops for Unreal Engine 4. 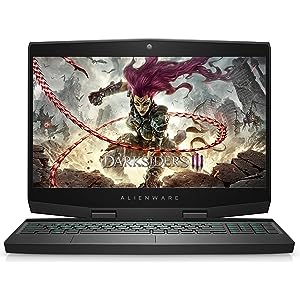 The Alienware M15 is in the echelon of the most powerful yet portable gaming rigs on the planet. Its specs and design have always been a shocker for the most competitors out there, and the M15 is no exception to that. The display option goes up to an impressive OLED UHD panel that has a one millisecond response time. The display is capable of 400-nits brightness that is adequately bright unless you are sitting directly under the sunlight. What an OLED screen does is that it can get you a glimpse of the rendered textures and how it would fare on most screens. This is an added advantage for a developer.

Under the hood, the M15 packs the newest iteration from the Intel, the 10th generation i9-10980HK processor. This is the best in mobile CPU’s and possesses 8 physical cores with 16 logical threads with 16 MB of the cache. It can be overclocked from the base frequency of 2.4 GHz to an impressive 5.3 GHz if you are able to keep it cool (below the 65C). If the system is unable to do that, the overclocking capability is capped at 5.1 GHz.

The RAM follows suit with up to 32 gigs of DDR4 memory that is enough for developers because some of it will always be consumed by background processes. The incorporation of a 1 TB Solid State Drive is a much appreciated and will bolster the rendering speed. The NVME configuration helps minimize the internal space consumption in the chassis while improving the response rates.

If that doesn’t baffle you, let us introduce you to the advanced Cryo-Tech cooling technology that maintains the cool while not experiencing any thermal throttling. The vents are neatly placed below with a design that does not burn your hands in the process. That comes in handy with the GTX and RTX series graphics cards that draw a lot of power and surge the thermals in the process. Rest assured, your VRAM requirements will be fulfilled with the 6 GB and 8 GB models that the M15 ships with. All in all, it is a superior machine, for a developer on the go. 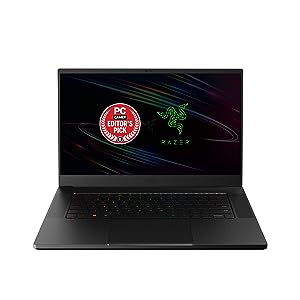 The Razer Blade 15 is another iteration from the makers that sits well with the consumers. It is one of the sleekest looking laptops and one of the tiniest to feature a 15.6-inch display. The laptop features a minimalistic, unibody design with the trademark black color with an illuminated snake logo.  The display employs the thin bezel scheme on all three sides with a beefy chin. The narrow-bezels have a thickness of 4.9mm if you’re wondering about that.

The 15.6 inches display has a FULL HD display with a 300 Hz refresh rate that is impressive but draws a lot of resources. The display is best for e-sports pros or you can go for the OLED 4K variant if you prefer a crisper picture quality. The 100 percent sRGB color gamut can help a developer in exactly matching the colors with the desired scheme in mind. Another major thing to notice is the RGB backlit keyboard in which the color of individual keys can be calibrated.

Venturing inside the laptop hardware specifications, you’ll find the 10th generation Intel i7 processor that features an 8 core design and a base clock speed of 2.4 GHz. It can be overclocked to 5.1 GHz if the need arises. The memory slots feature a dual-channel 16 GB DDR4 memory that can run the Unreal Engine with ease. The laptop comes with 512 gigs of M.2 NVMe SSD that can deliver better read and write speeds over a traditional SSD.

The laptop uses an NVIDIA RTX 2070 Super GPU with a Max-Q design that can deliver the same amount of raw power that a traditional desktop counterpart would be able to produce. The 8GB of GDDR6 VRAM is the maximum that you can get in a mobile-machine, keeping in mind its efficacy. The RTX 2070 will play your renderings with ease. Concluding it, Razer offers a great laptop with killer specs that would remove almost every possible stutters with its configuration. 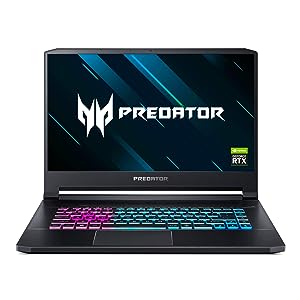 The Predator series has consistently challenged complex designs and performance-centric laptop builds. The Triton 500 follows in similar footsteps with a much lighter and slimmer chassis. The metallic construction makes it a premium build that is not flimsy in construction. Its hinge design is similar to the 2019 model and does not have much flex to it.

The display on the Triton 500 is an IPS panel with a Full-HD resolution that has improved than the yesteryear model. The 300 Hz display is overkill, considering the fact that there aren’t many applications to take advantage of it, in the present. But things might improve in the future and you can still use it in a few e-sports titles. The 100 percent sRGb color gamut is able to produce better color accuracy with it.

The 10th generation six-core Intel i7 processor has a base clock speed of 2.6 GHz and can be overclocked to 5.0 GHz. The dual-channel memory is upgradeable up to 32 gigabytes and can deliver higher bandwidths, due to the DDR4 configuration. The makers have noticed the SSD importance and haveemployed a PCIeNVMe 2 TB module, depending upon the variant. Using SSD as a primary storage option will supplement faster boot time and rendering speed.

The video department is taken care of, by the NVIDIA RTX SUPER series cards that are 25 percent faster than the non-super designs. Not a big change overall, but still laudable considering it a 2020 variant. The vent design with three fans ensures proper airflow throughout the system with the only problem being the noisy fan operation. Still, incorporating all that power into a tight-knit thinner system is not an easy feat. Recommended for the developers, especially ACER fans.

This was our list of the best laptops of the present year, that can help you navigate your skills through the Unreal’s development environment, without getting perplexed with extended loading times and lacking resources. These laptops are the best that the respective brands have to offer in a thin form factor and can put a massive dent in your pocket. This lineup is only suggested for serious developers, looking to work with the best hardware.